CAD Manager’s Column: Relying on your old computer may seem like a good idea, but will cost you more in the long run.

As offices have gone back to normal operation, I’ve been visiting clients just like I did before COVID-19. And while it’s great to be with people again, I must admit I’m a little concerned at all the ragged old computers — laptops and workstations alike — that I’m seeing on my travels. As a result, I’ve been talking to company owners and CAD managers about what I call the false economy of cheap computers and how those ragged old computers are actually costing them money.

Ever have trouble getting your company to update your old computers to modern workstations? Ever been told by accounting that it is always better to save money than spend money? In this edition of the CAD Manager’s Newsletter, I’ll share my methodology for making your company understand that “saving” money by using old computers actually costs more than it saves. Particularly when the cost of high value labor is considered. Interested? Here goes. 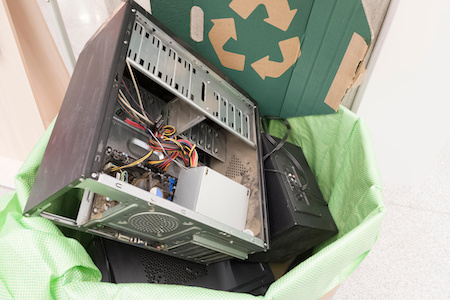 What is False Economy

The dictionary defines false economy as an action that costs less at first but results in more money being spent later. If you ask an accountant, they’ll likely bristle and say that spending less is always better than spending more. But, I doubt they’ve ever had to model a large BIM project on a 5-year-old CAD machine.

Rather than diving into a complex discussion of CPUs, RAM, SSDs, and GPUs — which the accountants won’t understand anyway — it is far better to start talking about practical examples like these:

People Are Expensive — Workstations Are Cheap

I know some accountants and company owners will disagree with me, but workstations really are cheap. In fact they are dirt cheap considering everything they do.

In a world of $1,000-dollar desks and $6 lattes, a workstation that cranks out high volume production CAD work for $3,000 (or less) is not just cheap, it is an insane bargain. So, if workstations are cheap, then what is expensive you may ask? Answer: the person who sits at the workstation!

“How in the world does this relate to CAD,” you ask. Let’s examine the case of Jim — a civil engineer who does massive projects like airports and shipping terminals, to illustrate.

Jim does a great deal of work on Civil 3D, supporting major projects. He’s often in the critical path of project completion and as such must deal with pressure and deadlines. On an almost daily basis, Jim deals with a variety of computer-related problems that stem from his 4-year-old computer with a generic graphics card, small SSD, and just 16GB of RAM. These problems include:

In fact, these problems are so common that Jim figures he spends a minimum of 30 minutes (0.5 hr) per day dealing with them.

The ROI of Wasted Time

Using the hourly cost value computed for Jim’s labor and a 30-minute (0.5 hour) per day waste of Jim’s time (due to crashes, reboots, and slow performance) we can calculate the true cost of Jim’s wasted time like this:

And, as we all know, time equals money, so the 120 hours Jim wastes each year comes out to $7,126/yr or when tallied over the three-year life of a typical workstation a staggering $21,378!

Why is it that Jim’s company is happy to pay him $21,378 over three years to reboot a computer 30 minutes a day but is too cheap to buy a $3,300 workstation? Well, the simple answer is that management didn’t understand how much money they were really losing. Let’s examine this problem from a return on investment (ROI) point of view.

Let’s take the math a bit further by performing a fast ROI analysis. ROI can be calculated using this equation:

This math is very compelling! So, if you have anything to do with requesting or budgeting for new workstations you must present this math to your senior management team for prompt consideration.

Request a meeting with your senior management and/or IT management and outline the following topics (I’ve also included some talking points for each topic to help get the conversation started):

We waste a lot of user time. Tell them Jim’s story and how you arrived at the wasted time estimate in a modest degree of detail.

Show them the cost of the workstation you need. The $3,300 figure can be used as an estimate, but a more detailed configuration sheet would be a better way to state your case.

Show them your ROI. Say, “If we could put $3,300 in a bond investment that’d pay us $21,378 in three years would we do it?” After they say, “YES,” at the top of their lungs, point out that this is exactly the scenario in your ROI calculation.

Close out with a user-based plea for help. Say, “I’m not asking for my own new workstation, but one for Jim because Jim needs it and the company will make more money if Jim is more productive.”

Raise the issue of staff retention. Say, “As hard as it is to hire civil engineers these days, do we really want to lose a guy as valuable as Jim because we’re too cheap to buy him a workstation? What would it cost us to train Jim’s replacement?”

Computers retired from CAD, new life in admin. Remind them that although the computers are too old for CAD use, they are still good machines and can be used to upgrade the office support staff.

As you make your pitch, remain calm, business-focused, and in control. Remember that you’re making a financial case for new workstations, so keeping the conversation strictly business will help.

If you’ve limped through the COVID years with old, boat anchor computers, then coming back to the office presents the perfect time to point out the false economy of continuing to do so. My hope is that you can use Jim’s story as a framework to create your own user stories. Your challenge now is to collect data on how much time is being wasted by your old computer hardware so you can make your sales pitch to management. Now, go get those new workstations!